Our very own rockstar sonographer, Amanda Lacey, is featured in this month’s Case of the Month!

Immediate comprehensive sonogram & Interpretation + Excellent case management = Thorough Diagnosis and Effective Treatment. Thank you to Dr. Amber Aher of Creekside Veterinary Clinic (Keizer, Oregon) for her excellent case management and the artistic sonography skills of Amanda Lacey of Animal Sounds NW Mobile Veterinary Ultrasound, along with the comprehensive and immediate interpretation by Eric Lindquist, DMV, DABVP, Cert. IVUSS (ABC’s), that resulted in a thorough diagnosis and prognosis within 24 hours.
Although the prognosis is poor for this canine, this above formula resulted in THE best patient care for this pup!

Image Interpretation
The right kidney revealed multi-focal, hypoechoic nodular changes with regions of capsular expansion and enhanced peri-capsular fat. This meets neoplastic criteria. Concurrent polycystic changes were noted. The largest cyst at the cranial pole measured 3.56 x 3.54 cm. The patient may have passed a right renal calculus from the right kidney and it is now in the urinary bladder. Disruptive changes to the renal cortex may have occurred secondarily. Slight pyelectasia was noted as well. The left kidney revealed irregular cortical infarcts and pyelectasia. The left kidney measured 5.0 cm.

DX
Renal carcinoma. Inflamed gallbladder mucocele and mucoduct.
Outcome
Thoracic radiographs were taken following the ultrasound and a probable metastasis was visualized. The patient was then referred out to a specialty referral facility for stabilization, coagulation panel, and right kidney aspirate with cytology. Cytology confirmed renal carcinoma. Due to the poor prognosis, the patient will not be undergoing any surgical procedures and QOL/medical management has been elected. The patient is currently stable at home. 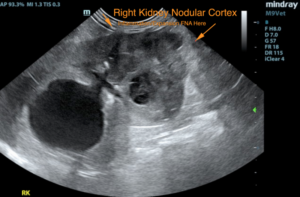 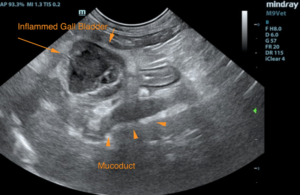 On the Road: Monday through Friday

You’re also welcome to contact us via text message or email to schedule an appointment.

If leaving a voicemail, please leave a number where we can contact you.

If calling after hours and would like a call back same day, please provide another number/backline where we can reach you.

"Pursuant to ORS 686.040, and in compliance with Oregon statutes, Animal Sounds works with referral from, and under the supervision of Oregon licensed veterinarians."